Block Coding - An A To Z Guide

Block Coding - An A To Z Guide

Coding has become one of the essential skill sets a human must possess in recent times. In simple terms, coding is nothing but a computer programming language written to make a computer behave in a certain way and ultimately perform the tasks you want to.

What Is Block Coding? 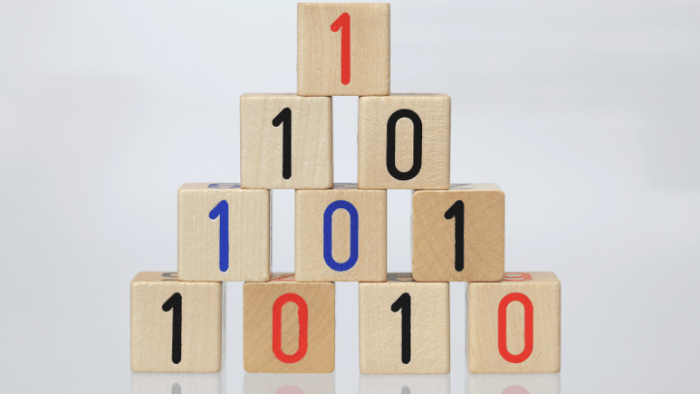 Before diving deeper into the concept of block coding, it is essential to understand the basics of it.

In uncomplicated terms, block coding is a process used in computer programming where text-based software codes change to a visual block format to create animated games, characters, and even stories. With block coding, kids can learn the basics and foundational concepts through visuals instead of text-based coding.

Block coding is considered syntax free and visual programming compared to text-based programming as it minimizes the errors associated with using complex syntax.

Block-based coding reduces the strain of using complex syntax and lets the programmer focus on tricky areas, which logically requires more attention. Unlike text-based programming, the best part about syntax free programming is that it eliminates the basic and minute syntax errors, which unnecessarily adds to the development time instead of reducing it.

In 2003 MIT decided to develop a primary computer language, which is now popularly known as Scratch.

Since then, block coding gained a lot of acceptance and got widely adopted by many schools and institutions to help kids learn to code. It is a first block coding language designed to teach kids how to code.

Block Coding emphasizes visual elements rather than text-based elements, making it easier for kids to understand as it is based on the concept of visualization rather than memorization.

The best part about block coding is its functionality, which purely works on the drag and drops method than assiduously typing individual letters and words.

What Can We Create With Block-Based Coding?

You all must be intrigued by knowing that exciting stuff can be created with block coding. If we talk in a more practical sense, kids can almost make what they imagine. Kids can bring any character and story to life by creating various sprites.

With the help of block-based coding, Kids can make the following Things.

For instance:- It could be a cat chasing a mouse or maybe cops chasing a thief.

In Fly Icon games, a player clicks on the up and down arrows to make a character move to the desired position.

For instance:- A snake moving through different hurdles or a man cycling through some specific road.

In ping-pong games, a keypad/mouse-controlled paddle moves by a player to and fro to prevent the ball from touching the surface.

Adventure games are a bit more complicated than the other games as they have a proper storyline and are usually longer than the standard block coding games.

There are multiple characters, backgrounds, and players required to complete a specific task to collect points and move on to the next level in adventure games. These are the typical games that we usually see on Google Playstore and the App Store.

There are various types of programming languages used in block coding. Let's discuss these languages in detail.

Scratch is a free programming language and is one of the most popular choices for teaching block-based coding to kids.

It makes it easy for kids to learn and create interactive animations, stories, games, art, and even music.

Scratch can be installed and run from any modern browser other than Internet Explorer or any smartphone. It has a pretty extensive library of blocks, which includes.

Motion blocks control the movement of scratch images ( also knows as sprites in terms of coding ) concerning other sprites or to the sprite itself.

For example- A single block creators can instruct a sprite to move 15 steps backward and 20 degrees to the left.

Looks blocks help change the sprite's overall appearance; it can change a sprite's physical appearance, size, graphic effects, etc. It can even make a sprite say or think something.

For example:- If you want to change the color of the sprite from red to yellow, you can easily do that with the help of a looking block.

With these blocks, creators can add sounds and sounds effects, adjust volumes, and edit pitch.

For example:- If you want to add bark sound or meow sound in a sprite, you can do that using sound blocks.

Released by Epic Games in 1998, Unreal Engine is a free to use game development engine to create various VR, 3D, and 2D games. It is popularly known for its splendid lighting and graphical components.

It also offers a visual editor called Blueprints used for creating the rules of the game where no coding experience is required. 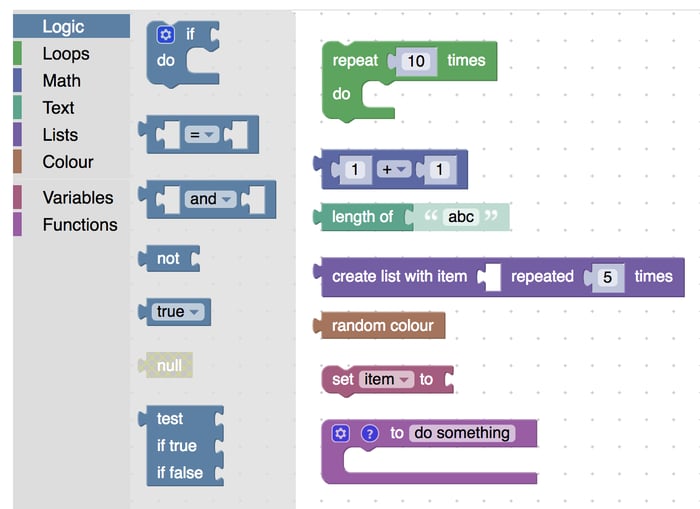 Blockly is a library that adds a visual code editor to mobile and web pages. It is open-source software and is entirely free to use.

Pros And Cons Of Block Coding

Every technology comes with its advantages and disadvantages, so does block coding. Below are some pros and cons associated with block coding.

The drag and drop process makes coding much more comfortable and less complicated. It is easy for both students and teachers to understand the programming language. Even an amateur programmer can learn block coding like a breeze.

2. Simple To Learn And Teach

One of the biggest challenges faced when it comes to coding is that many people believe coding is meant for people belonging to the technical field, which is not true as coding is made for all human beings, and anyone who aspires to learn it can do so.

With block coding, teachers who only hold the basic coding concepts can also start teaching.

The idea of the drag and drop option is so simple and straightforward that one does not require a profound understanding of coding.

The learning part of block coding is so interactive and fun that students literally enjoy it and are always ready to explore more.

Block coding is so fun and interactive that great programmers can’t resist experimenting with new stuff.

Unlike text-based coding, the risk of syntactical errors of shattering the foundational code does not discourage the programmers from experimenting.

The best part about block programming is that it allows both kids and beginners to experiment with the script without worrying about getting started from the beginning.

Learning should never be monotonous. It should always be fun and exciting, which is true in block coding as kids don’t have to memorize the codes.

They learn visually, which holds a higher impact, and it’s also much easier to understand and grasp the concepts quickly.

One of the most significant advantages of block coding is that it helps in the child’s logical development.

Unlike text-based coding, a step by step debugging is not attainable in block coding as it is not possible to break down the grouped blocks. Block coding usually produces very few errors, but there are very few errors, and the risk of errors is not eliminated.

In syntax free programming, the need to address the syntactical errors as soon as they arise gets withdrawn. Also, pre-generated blocks eliminate the desire to memorize and learn the actual syntactical command.

How Can Kids Learn Block Coding?

After going through all the information mentioned about block coding in the article, the next big question is how you can make your kids learn block coding?

Do not worry; to help you out, we list some free and paid resources from where the kids can effortlessly learn and grab block coding concepts.

If your kid is between the age of 5-7 years, all you have to do is make them learn to code through visual blocks, and MIT Media Labs Scratch has designed this incredible visual block platform that teaches kids the concept of block coding.

It allows kids to build fun games, apps, and anything they can imagine. Scratch provides kids with space for their creation, and they can get as creative as they want.

Code.org is a very popular platform and is used by many public schools to teach introductory coding to kids.

Code.org has also partnered with Minecraft, Scratch, and various other platforms to create modules that encourage making games, apps, and websites amongst school kids.

The best part about code.org is that they follow a systematic approach to teaching kids.

They emphasize drag and drop options rather than text, which does not make kids feel new to coding; instead, they enjoy experimenting with it.

Bitsbox provides hands-on experience to the kids and is one of the best options you can go for.

Their model is based on a subscription basis, and each month, they provide a coding themed project so that apart from learning the concepts, kids can try their hands-on live projects to sharpen their skills.

Codingal is one of the great platforms where kids can master the art of coding with experienced teachers’ help.

What makes Codingal unique is that they do not consider every child similar to others; instead, they believe in creating a personalized journey for every kid to enjoy every bit of coding.

Codingal is founded by two IIT alumnus who believes that every kid should fall in love with coding and should be able to create whatever they imagine, whether games, apps, characters, or anything that falls into a kid’s mind.

The best part about Codingal is that they would not insist you by calling thousand of times to purchase the course, but they offer a free class so that you can decide whether you want to go for the paid courses or not.

The fact that coding is a must-have skill that our kids need to learn if they want to thrive and get ahead of everyone else in the future, but here the catch is that coding should never be tedious for the kids, it should be always fun and exciting.

So it becomes essential to choose the right coding platform for your kids to learn and have fun at the same time.

1. Is there any age barrier for enrolling kids in the coding courses?

There is no age bar for kids to learn coding; they can get started as early as in grade 1.

2. Is coding only meant for students who are good at maths?

No, it is not meant for the students who are good at maths; coding can be learned by anyone interested in learning and expressing their creative skills.

Block coding comes with its advantages and disadvantages, but yes, we can say that it is pretty easy to learn block coding as it does not require a lot of memorization and works on drag and drop concept.

4. Does learning to code will make my child intelligent?

We consider every child as intelligent and has their strengths and weaknesses. Still, coding will undoubtedly help them sharpen their critical and cognitive thinking skills, which will eventually help them in their academics.